Australia Campervan Cost. Where to buy. Where to sell.

I did a nine month road trip in Australia starting in Perth and ending in Cairns. I bought a Mazda E2000 campervan to do this trip and noticed something. Campervans in Perth seem to have a higher value than campervans in Cairns. It was just a gut feeling at the time but it has stuck with me. I thought I should have done the trip the other way to save a few thousand dollars.

I had this theory for months after I sold the van and have now finally decided to do a bit of digging to see if it was true. My road trip is over and I most likely wont do it again but if I did, I would possibly change my starting and ending cities. I would buy a campervan in an area where it's worthless and sell in a city where it worth most. This bit of data analysis will hopefully show which city has the lowest and highest average value of campervans.

The campervan must be/have:
I chose these requirements because these were the basic requirements I had when I bought my van and I believe is also a good way to represent of the campervan market. Many people buy DIY converted vans but they have a wide variation of price and quality that is difficult to quantify and compare. Also Vans that are not currently registered or running represent a question mark of fees, inspections and repair costs. I didn't include these types of vans in my data because of these variations and uncertainties.

Here is an excel spreadsheet of all the data and analysis. Download

All vehicle data was sourced from ads on gumtree.com.au in May of 2017. I chose gumtree because it is easy to use and seems to be the standard website for buying and selling anything in Australia. Much like Craigslist popularity in the USA or eBay Kleinanzeigen in Germany. I also chose seven cities to test. These seven cities include the five largest cities in Australia, the largest city in Northern Territories and the city I sold my van in.

In the 7 cities I found a total of 87 vans that met all of the requirements. Some of these were high priced outliers because of things this test doesn't take into account. Things such as vans with four wheel drive, recently rebuilt engines or included camping/traveling stuff. I decided to exclude five of them because of their extreme high prices and low kilometers. Over $30,000AUD and under 100,000km. In the end I only included 82 vans in this study which isn't a very large number.

My data analysis strategy was very simple. Take the averages of everything and see if there is a big difference from city to city and city to overall. Once all the math was done there really wasn't a big difference. Cairns and Darwin only had 4 and 2 vans that met my requirements so their results are inconclusive. Brisbane was the most expensive with an average price difference from overall of $1,300AUD or 10%. Perth was the cheapest with an average price difference form overall of $400AUD cheaper or 3%. If you compare the cheapest and priciest cities for buying campervans, Perth and Brisbane, you see a $1700AUD difference or 12%. 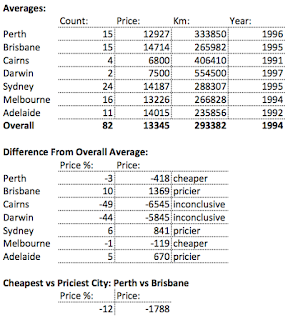 The three graphs show some general principles of things we already know. More Km on the odometer usually makes the price go down. The newer vans typically have higher prices. But oddly enough the newer vans seem to have more Km on the odometer. Conventional thoughts usually say older vans would have more Km but that doesn't show here. This may mean newer vans last longer so haven't completely died when they hit 400,000km but it also may be because of my small sample size.

My initial gut feeling was wrong. It may be best to buy a van in Perth and sell in Brisbane because on average campervans in Brisbane are worth $1700AUD or about 12% more.

There are some flaws with this quick data gathering and analysis that I will list here:

So now, taking into account all of these flaws, here is my actual conclusion. Buy and sell your van anywhere you want. Statistically my conclusions are unreliable and shouldn't outweigh other concerns. Its your trip so make this decision based on other factors that mean more or could potentially save you more. Don't start in Perth because it may save you $1700AUD and end up there in the cold rainy season or have to spend an additional $500AUD on flights. And don't sell in Brisbane if you want to end your road trip in Cairns or Sydney and take advantage of the cheap flights to New Zealand or Japan.

If by chance that you are on a tight budget, starting in Western Australia and ending in Queensland then put the slight odds in your favor. Buy a campervan in Perth and sell in Brisbane. You may not see the average price difference of $1700AUD reach your wallet but it can't hurt to try.