Note: For those who don't want to read the entire writeup you can buy this kit from my eBay store here. All you'll need is the original screws and a #00 screwdriver.

I window shopped for a nice set of noise canceling headphones for a long time. Feels like years. Soon on, I discovered the Sony lineup but could never justify the price. The high end Sonys go for $350+ new depending on model and if there's a sale. After months of indecision and talking about what to buy, it was my wife who noticed two things. The used high end Sony models sell for around $60 on eBay and they all had the same problem. A broken plastic hinge. So, we took a leap of faith and bought a pair. I then set on a several week long project to design replacements for the broken plastic hinges. These designs needed to be 3D printable with a normal FDM printer and needed to print without using supports. Here's the results....


The headphones were a bit dirty upon first inspection. But they worked flawlessly after a few hours of charging and a bit of cleaning. Amazing sound quality! The broken hinges were more of an annoyance than anything else. They pinched and pulled my hair a little when used and required careful handling to prevent complete failure. I'm not known for my light touch so... the hinges completely failed after just a few uses but could have lasted a bit longer if I was more careful. Here's some pics of the aftermath.

Time to disassemble and see what's inside. The only tool required is a size #00 Phillips screwdriver. I luckily have a very cheap screwdriver left over from working on my Macbook. (I think it came with an iFixit kit.)

Note: Theres great tutorials on how to disassemble these headphones on youtube. Probably best to watch a few before attempting it yourself. I sure did.

Disassembly of the headphones revealed some good news. It's symmetrical! The left and right side use the same two parts. Meaning, I only had to design two parts, not four. The next part of this project was a bit more tedious. I spent several hours designing and 3D printing the first prototypes. Which of course didn't work. They weren't even close...

All the designing and 3D modeling was done with basic tools. Every measurement was taken with a simple set of digital calipers. And I used Autodesk Fusion 360 to do all the 3D modeling. I started with the easier outside cover. Made several iterations of these to just get overall length, width, curves, print settings and everything else dialed in. When that was close enough I started the more complicated inner hinge and went through the same process.

With the design done I started really paying attention to the 3D printing process. I used Cura to slice the files and printed on an Ultimaker 3. Material used was Matterhackers Build series PLA. I had green so that's what I used. General print settings used were .15mm layer heights, large raft, and very very slow. Maximum of 30mm/s print speed. Thats the only way I could get it to repeatably print parts to maintain required size.

Several days and a dozen failed iterations later I had the final prototypes. Their overall shape and function is the same as the original parts. A bit bulkier than the originals. I added about 2-3mm to the overall width and thickness for added strength. I figured this added bulkiness would be noticeable when assembled on the headphones but its not bad. These final prototypes were also way more solid than the original Sony parts. This is mostly to make it more 3D printable but it has the added benefit of making them stronger too. The original parts were injection molded and have very thin walls. This helps with their manufacturability but is also why they fail. See pics below for a bit more detail on this. 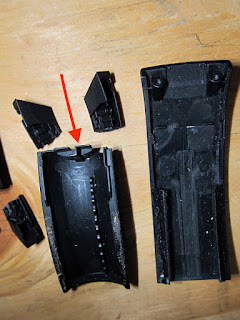 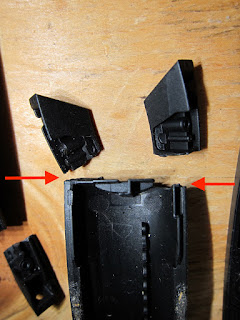 I ordered some black PLA for the final version. I stuck with Matterhackers PLA because its affordable, easy to print and easy to get. These headphones will mostly be used indoors so printing out of PLA is good enough. If I was designing a similar part that would be used outdoors or in a harsher environment then PETG would be a better choice.

In the end I am very happy with the results. The repaired headphones look great and function just like the originals. It worked out so well that this pair of headphones became my wife's and we got a second set for me. With so much time invested in this project I decided to list these parts on eBay. At the time there were no affordable replacement part options. Over a year later I am still printing these replacement parts and now in different colors. You can find them on my eBay store here. Selling these was my first successful product and has afforded some upgrades for my Ultimaker 3 and a complete second printer.
3d_printing engineering projects