- January 23, 2018
3D Printing has been a hot topic for the last few years. So much of a hot topic that it has found its way into the general consumer market. Many an aspiring maker has one sitting in their office or living room slowly extruding plastic into various shapes. The last part of the sentence, various shapes, is what concerns me a bit. It seems most of what gets printed are decorative trinkets that are generally useless. They sit on a shelf to be admired for a few months and then get discarded for the latest trinket... That's not what I've been printing. I've been designing and printing useful parts with a consumer FDM 3D printer focusing on mountain biking. So, here are five useful/functional prints I designed for my mountain bike.

A lot of what you can find for bikes on Thingiverse (a community based archive for 3D models) falls into the generally useless category. Some may be useful and some may be practical but are rarely both. Though to the designers credit they are usually very cool. (See the bike cog I designed above. Cool, but very useless.) Good examples of this are shown in Thingiverse screenshots below.

The T-Rex skull seat is awesome but not too practical as it would be fairly uncomfortable. The brake lever assembly seems useful but I would feel better off with a more practical aluminum lever. Probably the best example of a cool, useful and practical model for bikes on Thingiverse is the storm trooper valve stem caps shown below. (I'm pretty stoked with this model and I intend on printing some when I get some white filament.) Though its just a valve stem cap so we're not exactly printing a performance upgrade. 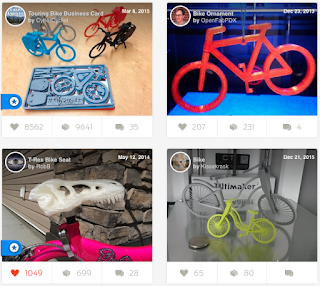 To combat this general mentality of FDM 3D printers only making useless things and to help give back to the community I started to design and print mountain bike parts of my own. My 3D printer was fairly new and I hadn't used it for functional parts yet so I started with some very simple designs and have worked my way up. Some are more useful than others but all of them served a purpose. Some have even been in hard use for the last several months. So... after this long introduction here are 5 useful 3D prints for mountain biking.

Note: To see my designs check out my Thingiverse Profile: https://www.thingiverse.com/T70E/designs/page:1


First off and least useful are the 3D printed spacers. These spacers are for getting your single speed chainline perfect or for just shimming up your headset. They were the first functional bike parts I made and I've gone through a few different versions. The most fun are the wave series that interlock together. The best part about 3D printed spacers is they are easy to design and print. Almost anyone with basic modeling skills and a budget 3D printer can make them.

I printed these cog spacers as a good way to get my chainline dialed in perfect without spending $10 on random aluminum spacers until I got it right. These spacers have worked perfect the last few months and I don't expect to have any problems. They are just spacers and don't transfer any load.

#4 Chain Whip and Other Tools: 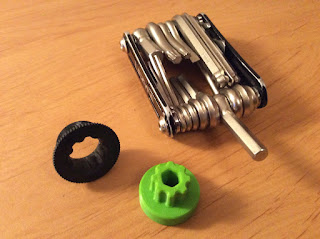 Next up are bike tools. The best ones I have printed so far are a chain whip handle and a large torx bit for removing the plastic cap on my Shimano XT 2 piece crankset. I had a box of random bike tools laying around but I didn't own tools like this so having these has really saved me time and money. Despite their success and usefulness these tools only rank #4 on my list because 3D printed plastic isn't the best material for most tooling applications. It has been difficult to come up with a third tool design especially when there are so many inexpensive and extremely durable steel bike tools on the market. (Though I did settle on attempting a bottom bracket tool next and have various designs to test out.)

Despite these shortcomings my 3D printed tools have held up well over the last few months. The best part about printing my own tools is once the design is finished its really easy to make a second or third one. So I can have dedicated bike tool kits wherever I need them. (One in the garage, in each car, at work...wherever.) 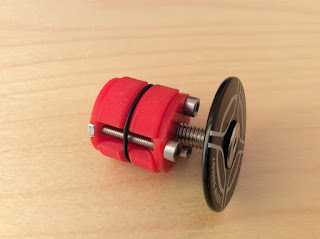 Going up the chain a bit toward more useful 3D prints for mountain biking is the expanding headset nut assembly. I had spent a few months designing single piece models. Now that I was comfortable holding simple tolerances, I decided to design something a bit more complex. This expanding headset plug works flawlessly and is fairly simple to print as well. It has the same functionality as commercially available ones with one exception. The expanding nut works with 3 smaller M3 bolts instead of one centrally located M6 bolt. Its a small difference and really doesn't change much.

This 3D printed expanding headset nut is lighter, cheaper to make and can be modified/reprinted for any size steerer tube of the foreseeable future. The only reason it doesn't rank higher in my useful prints list is most bikes don't require one. Most bikes use an even simpler, lighter and less expensive star nut. The only bikes where an expanding headset nut makes sense is ones with a carbon steer tube. And that's pretty rare for both mountain bikes and road bikes. 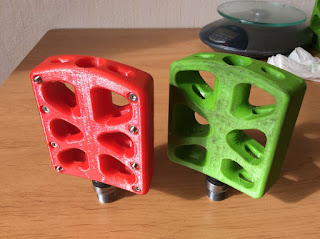 Making 3D printed bike pedals has been a huge project of mine and will remain so for a long time. I'm continuously looking for new ways to make them better. Hopefully, one day, they will become better than commercially available one. Until they reach perfection, I have a few basic designs that work well enough. The green PLA pedals were the first ones I printed and are still going strong several months later. (I only use them for pedaling around town and on some short local trails so that's possibly why they have done so well.)

At this time 3D printed bike pedals only rank #2 on this useful print list because of a few problems that still need to be worked out. They are heavier than typical plastic pedals. They use a lot of material so take ages to print. I have also had many break in half during heavy use. It's because of these drawbacks that I just can put them at the top of my list as the most useful 3D print for mountain biking. But when all the bugs are worked out they could easily rank #1.

It was a tough choice and feels like a bit of a sellout but ranking all the little brackets and mounts at the top of the list feels right. Whether it be a simple clip for a braze-ons or a complex phone mount you simply can't beat the on-demand versatility of a 3D printer. Especially for small and complex parts.

On one occasion I found myself preparing 3 bikes the night before tour. In one night I printed several plastic braze-on clips to replace broken ones and fix some cable routing issues. I printed 2 different light mounts for older lights we had as spares. That way each bike had its own lights. Lastly I printed a handful of plastic clips to help strap down our handlebar bags. All these little things were useful and practical.

Write a comment here. Let me know what you think...