- April 02, 2017
I've replaced forks, bottom brackets and even done a little wheel truing. So when I decided to build a mountainbike from frame up I felt fairly confident about building the wheels too. In the end this wheel build went well for my first build. I did have one problem, I miscalculated the spoke length. The spokes ended up being about 3-4mm too short and will have to be built a second time. Even factoring in this mistake, building the wheels myself saved money, gained me valuable knowledge and added a few good tools to my garage.

Components and Spoke Length Calc:
The first thing to figure out is the components for the wheelset. (Rims, spokes and hubs.) After a lot of shopping and reading I settled on 29er Raceface Arc 40 rims, DT Swiss Competition spokes in black, a DT Swiss 240 Singlespeed rear hub and the Jones 135/142 front hub. All of these components are of high quality and coupled together make a strong wheelset with nearly no dishing.

I built these wheels with 290mm spokes. They were too short. My mistake was a simple one. I didn't take into account the 3-4mm nipple head length that should be added to the effective rim diameter, ERD for short. Later I will use 293mm long spokes. Below are two calculations and some pictures to show my short spokes. 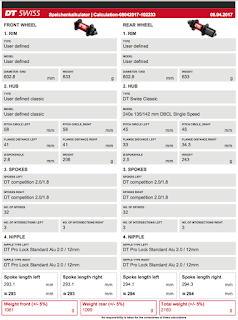 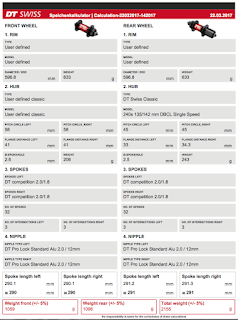 Right is the first calc that was too short. Left is the second
calc adding the 3mm spoke nipple head hight.

Cost:
Initially, I was going to have the local bike shop build these wheels. That turned out to be a bit more expensive than I thought. Two shops initially quoted me €45-50 to build each wheel. Not a bad price. After I decided what components I was going to use I went back to the shops and they raised the price. The base fee was €45-50 but then they charge an additional €20 fee for every component I don't buy through them. They weren't dealers for the rims or hubs I wanted so that brought the wheel build cost up to about €90 per wheel. After adding some taxes, the total was around €200. Thats just labor. After hearing this from two different local shops I started shopping for some tools to build them myself.

Shopping for wheel building tools is a bit tedious when you are trying to do it on a budget. I spent a few hours looking a DIY wheel truing stands but finally settled on buying only two hand tools. A Park Tool triple spoke wrench for about €10 from bike24.com and a spoke tensiometer made by Katana for about €40 from Bike_Discount.de. This tensiometer was by far the cheapest I had seen on any website. I had some doubts about its quality. But it worked quite well and after using it for two wheels, it still seems to give a consistent tension reading. Other than these two purchased tools I used a Q-Tip and spare spoke as a nipple drivers, made a simple dishing tool out of cardboard and used a plastic ruler taped to my bike frame as a truing stand.

Setup:
Once I had all of my wheel parts and tools, I started setting up to build my wheels. I covered the two spoke wrench sizes I didn't need with tape. I did this so I wouldn't accidentally use them and oval one of the aluminum spoke nipples. I also noted down the tension I wanted on the tool so I wouldn't forget. Lastly I setup my bike frame so it was at an easy hight to use as a truing stand. That means seat tube all the way extended and my H-Bars rotated to make it stable. These are pretty simple things but they helped prevent issues along the way.

Building the Wheels:
Lacing
After some more cleaning up I started lacing wheels. It was surprisingly difficult because you really have to bend and force some spokes to get them started. Most of the bending was due to the extra thick flanges on the DT Swiss 240 hub. The narrower flanges on the Jones front hub made it much easier to lace.

There are some really great resources out there for first time wheel building. I watched hours of youtube videos showing various lacing cross patterns and spoke number combinations and found it very helpful. I even watched these videos while building the wheels. Was kind like having a coach talk me though the process. Do a simple search for "bicycle wheel lacing" or similar on youtube and find one you like. Here are a few links to ones I liked that are specific to 32spoke 3 cross lacing: TheBikeTube and furulevi.

Something to not overlook when lacing your wheels is preparing the spoke threads. This is to make the nipples easier to turn and help prevent the spokes from twisting during assembly. It also helps prevent corrosion over the lifespan of the wheels. Many people use spoke prep, linseed oil, 3-In-One oil or grease on the spoke threads to prevent these issues. I used grease for this build mostly because I already had some in the garage.

Truing & Tensioning:
Once the initial wheel lacing was done it was time to true and tension the wheels. To do this I first numbered each spoke with a bit of tape. This was to keep track of which spoke needing adjusting or tensioning. If they aren't numbered, they all just look the same and its easy to get confused. As a side effect, the tape was a good indicator for spoke twisting tensioning the wheels.

After each adjustment where I got close to running true I would tighten each spoke by one quarter turn. After that I would check tension with the tensiometer and adjust any spoke that was higher or lower than all the others. To keep track of all the different tension measurements I made a wheel truing tool with MS Excel. (Wheel Truing tool download) Park tool has a similar tool called Wheel Tension App (Link to Park Tool) but it only works with their TM-1 tensiometer that costs twice as much as the Katana. In reality that's only a €50 difference, not very much. But this project was about learning and trying to save money where I could so I went the cheaper way.

Conclusion:
Using the method shown here it was surprisingly easy to get the axial and radial runout to within 1mm and the spoke tension to within a +/-10% range. I would have tried to get better than 1mm of runout but it's a 29 plus wheelset so I doubt I will feel 1mm of wobble through all that rubber. To get better than 1mm of runout I would have also needed something better than a plastic ruler. Lacing both wheels took about 1 hour. The first wheel took about 6-8 hours spread out over two days to true. The second wheel took about 3 hours to true. After a bit more practice I can hopefully do a wheelset start to finish in just 2-3 hours.

It was a good weekend project that taught me some new skills. The spokes did end up being too short but that's ok. I will replace them in the next few months with the correct length. In the mean time I'll ride on these shorter spokes and monitor their tension to see if the nipples are slowly fatiguing over time.