Ive been riding singlespeed rigid mountainbikes for a few years and really like it. (Link to see my Bike History) After months of considerations, I decided it was finally time to build one up exactly the way I want it. (Steel frame, massive tires, no suspension, mechanical disc brakes...) I chose to build a Jones Plus 135 singlespeed.

Why I chose the Jones Plus:
I chose the Jones Plus 135 for one main reason, comfort. The Jones Plus has a unique truss fork design that uses a wide front hub for extra strong wheels and can turn massive fat bike tires. Its capable of running up to a 29x3.0 or 27.5x3.8 or even a 26x4.8 front tire. The rear officially only mounts up to a 29x3.0 but some forum posts show a 27.5x3.8 fits. The fork and big tires combined with the more upright seating position and the Jones H-Bar makes it a very comfortable and balanced ride. A ride that takes most the weight off of your arms. This is critical for me because I was recently diagnosed with arthritis in both wrists. At 29 years old I have a long time for it to get worse.
(Link to the Jones Website) (Link to MTBR Forum for the Jones Plus) (Link to Youtube vid interview with Jeff Jones)

The Jones Plus 135 has many features and design elements I like:
- Steel frame and truss fork
- Jones H-bars
- 29+ Wheels
- Eccentric Bottom Bracket
- 3 storage spots of bottle cages
- Good mounting options for rear racks

Frame, Fork & Bars:
I purchased the frame, fork, headset, eccentric bottom bracket, front hub, front axle and handlebar from Jeff Jones. After receiving the frame I spent a day preparing it by spraying the inside with some rust inhibiter. I did not use frame saver. I used general purpose spray on chain oil. It was much cheaper and seems to work just fine. After spraying, I left it to drain the excess oil overnight. The next day I started installing some of the smaller components.

The headset was the most complicated of the small parts. For that I took it to a local bike shop to have the head tube faced and reamed. They charged me 15 euros to cut the head tube and press in the headset. Not a bad price especially considering it would have cost me about that much to cobble together a DIY style headset press.

Once the headset was in, the fork was next. It was a little tricky to install the truss fork but not as bad as I had expected. There is a gap between the two fork clamps and the headset. This gap need to be filled with some generic 1-1/8" headset spacers. Jeff Jones sells a kit of extra thin spacers for $10 but I bought an assortment for $5 that gave me enough spacing options to accommodate any amount of gap. (2x2mm, 2x3mm and 1x5mm) The normal amount of gap is around 9mm as mentioned somewhere on the Jones website. I didn't cut the steerer tube at this time. I waited till the bike was finished and then took it for a few laps around the block to figure out if I liked the handlebar height. Even then, I slid the steerer tube down about 20mm so I would have a bit more length if I decided I wanted to raise the bars after a few rides. Im glad I did this because I did raise the bars an additional 10mm months after finishing the bike.

Brakes:
After the front fork was on I installed the brakes. I used Avid BB7 mechanical disc brakes with a 200mm rotor up front and a 180mm rotor in back. Between the Speed Dial 7 levers and BB7 calipers I used Jagwire's Mountain Pro cable kit. The cable kit uses compressionless housing that outperforms standard brake cable housing. This brake system is perfect for me because it has simple brake pad adjustment without having to mess around with bleeding hydraulic brakes. But most importantly, it will be able to stop myself and the huge 29+ wheels with the added performance of large discs and compressionless housing.

The Jagwire cable housing was difficult to cut and get the cable ends on. Its strong cable and the cable ends are a very tight fit. I strongly recommend using a good sharp set of cable cutters and having some patience when installing these.

Wheels:
After installing the brakes came the long process of lacing, truing and mounting the wheels. This was the most complex part of building this bike and deserves a post on its own. (Link to 29 Plus Wheel Build for more details.)

For the wheels I used Raceface Arc 40 rims, DT Swiss Competition spokes, DT Swiss 240s SS rear hub and a Jones 135/142 front hub. With this basic wheel set I used some generic rim tape, two Schwalbe 29+ tubes and a pair of WTB Ranger 29x3.0 tires. These tires are the lightest affordable 29+ tires I could find. They also work great on trails and don't feels like a drag on the pavement. They were however the most difficult tire I have ever had to mount. It was an extremely tight fit getting them on the rim and took several inflations up to around 40psi to get them seated. I hope the bead stretches a little or these will be a pain if I ever get a flat mid ride.


Drivetrain:
Once the wheels were mounted I installed the bottom bracket and crankset. For this I went with Shimano Deore XT 3x crankset and its included bottom bracket. You may ask why I went with a 3x crankset when this is going to be a designated single speed bike. The answer for this is simple. This bike will only be a singlespeed for its first few months. Eventually it will be turned into a dinglespeed. I went with the 3x crankset with the intent to replace the large chainring with a bash guard and keeping the other two chainrings for use as a dinglespeed. Converting to a dinglespeed will be a separate blog post.

For singlespeed gearing I guessed. I already have a few chainrings and rear cogs so I used the 32t middle chainring and a 19t Surly cog. I plan on playing around with gear ratios a while before I settle on which ones I want to use in the dinglespeed setup.


Saddle & Seatpost:
The last piece of this puzzle was the saddle and seatpost. The seatpost was simple. Bite the bullet and buy a Thomson elite 330mm black without any setback. They are a very high quality seatpost and I have had them on bikes in the past. I really didn't know what to buy for a saddle. I did tons of reading but just couldn't decide. In the end I bought a cheap one on sale. A Selle Italia X2. Its a bit hard but was a good price and will probably get softer as it wears in.


Conclusion:
Building this bike was a lot of work. I spent months of reading, shopping online and walking to around to local shops. I built up the bike as I ordered parts so don't know how long it took to build in hours. At my casual working pace I probably spent a week with about 4-5 hours a day physically working on it. In the end, this bike is exactly what I wanted and spending time to build it myself makes it more than just some bike I bought at a local shop. 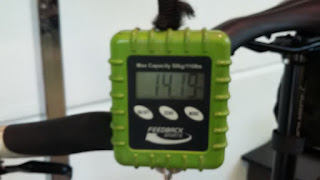 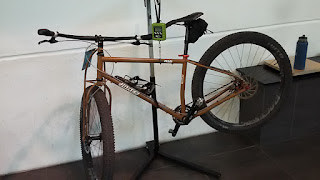 I saw a scale at a local bike shop and figured I would see what the Jones Plus dinglespeed weighs. Above is it fully loaded with tools, blackburn outpost cargo cage, dinglespeed gearing and some mud. It weighed in at 14.19kg about 31.3lb. 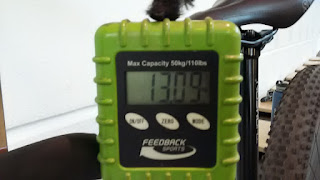 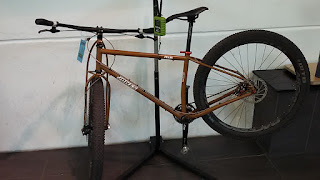 I then removed the seat bag with tool as well as the blackburn cage to get a better idea of the bikes actual weight. It weighed in at 13.09kg about 28.9lb. All this weight info was surprising. I had no expectation for my build to be under 30lb. I didn't buy light weight components or give weight much consideration at all. Its interesting to think that going tubeless and converting to some carbon parts could get it in the 25lb or 11.5kg range. Not something I expected for a long wheel base steel frame 29+ bike with touring bars.